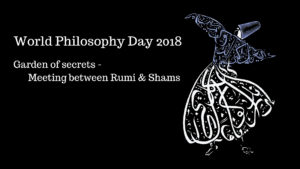 Meeting between Rumi & Shams
Would you recognise a true Master if you saw one? What does it take to find a true Disciple?

The meeting between Rumi and Shams on 15th of Nov 1244, was a mysterious grand event that led to the mystical evolution of these profound masters.
Join us, on a journey beyond poetry and wisdom; an active search after the disciple & master that lies within every one of us.

Speakers:
Ariel Druckman is the National Director of New Acropolis Australia. Ariel started his journey towards becoming a living philosopher, 18 years ago at the school’s branch in Tel-Aviv. Since then he is promoting philosophy as a means to integrate the western and eastern wisdom as a practical path to know oneself and the world around us.

Hamid Homayouni is the founder of InnerChange Life Coaching offering a unique fusion of timeless wisdom and modern psychology services to clients. Hamid has been on the path of self-realisation for many years with special interest in the Sufi tradition. As a keen student of Rumi’s teachings and privileged to access his works in the original language; Hamid has begun translating a selection into English and has written a number of articles in an attempt to make Rumi more accessible to today’s readers.

Sam Lotfollahi is the CEO of Millennium Migration. With more than 10 years of experience in Australian Visa Migration. Recently he has started his own migration and journey into the majestic, breathtaking inner world. His love with Rumi and Shams has ignited not very long ago through one of Rumi’s Magical stories by a friend’s fireplace. Sam is a passionate Shams devotee with one mission in mind, spreading the word of love.

The event will take place at the Temperance Hall (199 Napier Street, South Melbourne 3205)
The venue is not wheelchair accessible.
Doors open at 06:40 pm
Tickets: https://goo.gl/FxdRVt